A report on the visit by Strathkelvin Preceptory to Hull on 23 May  2015 can be found here.

The District Grand Prior has recently made Charity Presentations. Reports and photos are on the “Charitable Donations page.

The Annual District Muster took place on Saturday 18th February 2017 at the Masonic Temple, Bowling Green Street Bellshill.  66 Fratres signed the Muster Roll, and all Preceptories in the District were represented: no fewer than ten reigning Preceptors formed the Arch of Steel to receive the District Grand Prior and his Commission.  The same honour was accorded the Most Eminent and Reverend Grand Master and his deputation who graced the occasion.

All enjoyed the proceedings, the business affairs of the District being swiftly dealt with before the Elective Officers and Elective members of the Standing Committee were accepted and installed by the District Grand Constable, John McAlpine.  The District Grand Prior's Report is available elsewhere on the website.

After the Muster the Fratres adjourned to refectory - and the highly-anticipated District Prize Draw, with a steady stream of lucky winners being announced.  This was followed by a second raffle draw for tickets sold on the day; again, a large number of Fratres went away very happy!

Taken together, the raffles raised the most impressive sum of some  £1,500 - a tribute to the generosity of all Fratres in the District.  As a result, the Fratres of Rising Star and Henry Dyer Preceptories are to be asked to nominate a suitable charity for a donation of £500 in each case.

A debt of gratitude is owed to the Lodge who continue to accommodate us; to the Preceptory of Mudostoun for the use of their paraphernalia; to those who beavered away to set up, run the event and clear the hall; and, not least, to the long-suffering Fratres of Bute Preceptory who (again) had to cancel their Muster in favour of attending the District Muster - and who brought no fewer than twelve of their number along to the occasion. 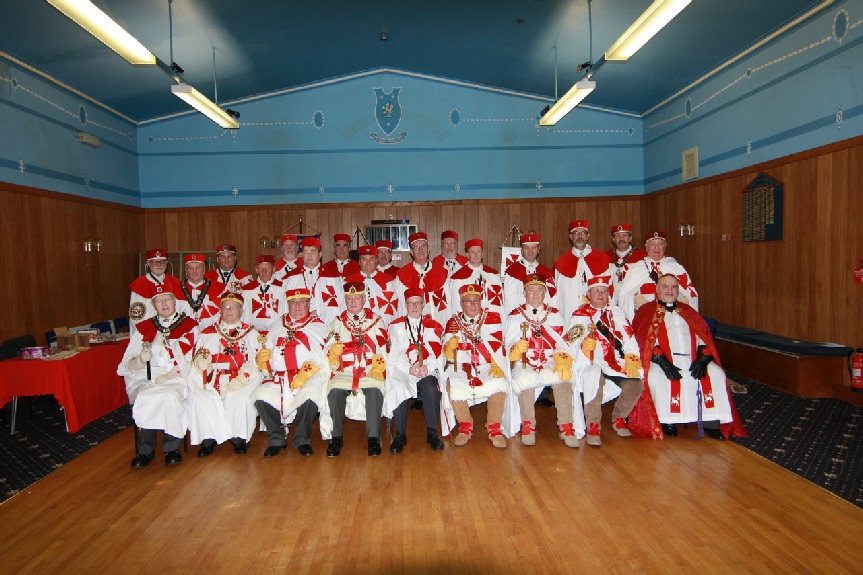 Members of Great Priory, the District of Strathclyde and officers of Murdostoun Preceptory at the Centenary rededication celebration of Murdostoun.  (photo taken by Ven Fr Edward Gray). 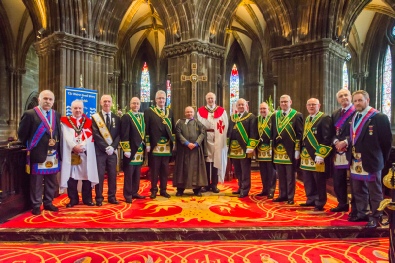 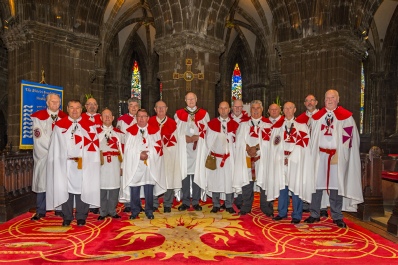 Our Divine Service took place on Sunday 6th May in Glasgow Cathedral.  Hosted by our District Grand Prior’s own Preceptory, St John Glasgow, the event was attended by a congregation of some 100 – including the inevitable few Japanese tourists, no doubt deeply puzzled (but hopefully impressed) by the presence of so many in colourful uniforms.  The occasion was enhanced by representatives from Provincial Lodges, Provincial Royal Arch and the Intendency of Strathclyde, all of which further cements the bonds between our Orders.

Led by the Reverend Keith Ross, who delivered an inspirational address on the theme “Are we pilgrims, today?”, the service matched the setting in reflecting the true nature of our Order.

After the photographs (courtesy of Ven Fr Stewart Gordon, Preceptor of Strathkelvin Preceptory) all adjourned to the adjacent St Mungo Museum where a lavish refectory was enjoyed by all who had attended what was a wonderful day.